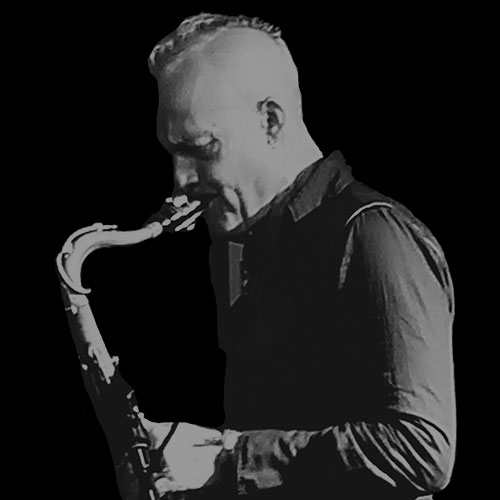 Biography
Jazz saxophonist and composer Dennis Mitcheltree has just released his 5th album as a leader, Nevermind the Circus. Mitcheltree is a mainstay of the tenor saxophone, having been based in New York City from 1987-2007 and in Los Angeles from 2007 to the present.

A former student of Joe Viola, Billy Pierce, Jim McNeely, George Garzone and Joe Lovano, Dennis is also a renowned jazz teacher and clinician of jazz improvisation, harmony, composition and saxophone/woodwinds. He teaches privately and as a guest artist/clinician/lecturer at universities and jazz education programs worldwide.

"He is a master storyteller with the tenor sax..."
Jared Donze, Iowa City Icon

"...the saxophonist is aggressively adventurous and most expressive...Mitcheltree evokes hearty tones from his instrument as he masterfully interweaves unexpected lines to create fascinating sound tapestries at any tempo."
Nancy Ann Lee, Jazz Times

"...one of the area's best young tenor players...His album "Brooklyn" (Dengor) is one of the better records of the last two years."
Martin Johnson, Newsday (NYC)

"Mitcheltree's quartet is definitely hard-core NYC: tough sounding, aggressive, and complex. They swing hard, even at midtempo, as though all of them were percussionists, which infectiously pulls the listener into their complex conversations."
Dave McElfresh, Jazz Now

"...an awesome recording that every jazz enthusiast should become familiar with. This should be on your must get list; I have become a fan with the first listening - you will too."
Michael L. Bolden, Brooklyn Advocate

"He strolls with an elegant sound through the history of jazz in the classic saxophone trio format, and on a few tracks in a quartet setting with piano. Along with his reverence for the jazz masters he has an enthusiastically fresh approach to his music."
Volker Marquardt, German daily newspaper, TAZ Hamburg

"He's a player whose appeal resides in his effortless textural patterns and unbroken tone..."
The Jazz Report

"BROOKLYN by Dennis Mitcheltree is, without doubt, the best piece of independently, artist-produced jazz of '96, skillfully composed and executed by a fellow who I consider to be a talent very deserving of wider recognition."
Daniel Kozak, Cyber City Magazine/Music-Real Jazz

"...talent like this will rejuvenate jazz for another generation."
Chico Jazz Radio

"...the highest quality Jazz music I've heard for quite some time."
hEARd Magazine